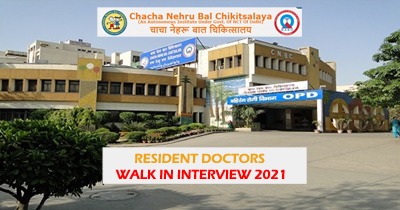 A Walk-in- Interview for appointment to the following post will be held as per details given below, in the Conference Hall, Chacha Nehru Bal Chikitsalaya , Geeta Colony, Delhi- 110031.

The details of eligibility conditions are given below:-

Qualification: M.B.B.S from recognized university. The candidates must have completed internship.